In this video, Dr. Bill Rawls reveals which herbs proved most powerful, and explains the significance of the findings for treating Lyme when the go-to conventional therapy — antibiotics — often fails to resolve symptoms in so many patients. Learn more about Lyme disease treatment here.

Hello, everyone. Dr. Rawls here. I’ve got an interesting new study that I’d like to share with you. This study is significant because it’s looking at herbs specifically for treatment of Borrelia, the microbes associated with Lyme disease. And very importantly, it was out of Johns Hopkins University, the prestigious medical institution.

It looks like alternative therapies are finally getting some attention in the mainstream medical community. Now, there are plenty of studies out there showing that herbs have antimicrobial activity, and there are many herbs that have antimicrobial activity. But this was the first study that was specifically looking at Borrelia, and they looked at a couple of different species of Borrelia. It’s very important for that alone.

They were looking at some commonly used herbs, and actually many of the ones that I recommend, which is really awesome. Top on the list was Cryptolepis, behind that Japanese knotweed, cat’s claw, Chinese skullcap, artemisia, black walnut, Cistus incanus, which is actually more of an essential oil, Andrographis, stevia, grapefruit seed extract, and monolaurin.

These are some commonly used herbs for Lyme disease, and they tested each one. Now, it’s important to note that it was a test tube study. It was an in vitro study.

They did that on purpose, because they wanted to document that these herbs were actually killing Borrelia directly, and not killing by affecting the immune system, which we all know that they do that. This was studying to see which ones actually killed Borrelia outright.

The other thing that’s significant about this study is they compared it to antibiotics. They compared herbs to doxycycline and cefoperazone, which are two antibiotics that are commonly used in Lyme disease treatment. They also we’re looking at how it treated the active motile forms and the persister forms, the cyst ones that are so hard to get rid of.

Also, artemesia or wormwood and black walnut were excellent. Cistus incanus, not surprisingly, has a very potent essential oil called carvacrol that’s also somewhat toxic, so you have to be more careful with it. But it was toxic against Borrelia, too.

The things that didn’t work, didn’t show any significant activity against Borrelia, one that I was surprised to see was andrographis, because that’s a favorite herb. Stevia, we’ve heard a lot about stevia, it had no activity.

The grapefruit seed extract they used also did not have any activity. And monolaurin didn’t either. That really adds a lot of great information as far as looking at how we go about treating Lyme disease.

I think there are some things that are really important to point out here. It’s really great to have information that we’ve got this set of herbs that do have even better activity than antibiotics. But it’s also important to recognize that there are other ways that these substances can work.

And that’s why I would not take andrographis out of a formula for Lyme disease, because we know that one of the big advantages over antibiotics with the herbs is they can have a broader effect on the immune system. They can reduce inflammation and enhance the ability of the immune system to eradicate. We know that andrographis is a really wonderful immune-boosting herb.

Now in addition, we also know that it’s not just Borrelia when we’re talking about chronic Lyme disease. What we’re talking about is a situation where the microbes and other things come together to disrupt immune system functions. The immune system is weakened, and that allows not only Borrelia to flourish in tissues, but all the things that we call coinfections in addition to the other microbes that we all harbor in our tissues, like Epstein-Barr virus and herpes viruses and all these other things, they start coming out too.

I liken it to a boiling pot that, once the immune system falters, it’s not just Borrelia, it’s everything driving this train and making it worse. That’s where andrographis I think has real value: It has some nice antiviral properties, and also it’s affecting a lot of other things that maybe some of these other herbs aren’t getting quite as well.

Other things to talk about in this study, as far as the other herbs. Reading the study, the grapefruit seed extract — this is one that’s been around for a long time and has documented antimicrobial activity. They didn’t find any against Borrelia and the reason they offered was that they used organic grapefruit seed extract.

They also talked about stevia. They couldn’t get stevia to do anything. Where there are other studies out there that have, and what they were speculating was that the other studies were using stevia products with high alcohol concentrations, and that could have actually been the antimicrobial activity, but not the stevia itself.

Now you’ve heard me talk about stevia a lot. Stevia has never been used to treat infections. It has other properties that are beneficial when you use the whole extract, and it probably does have some mild antimicrobial properties. Most herbs do. But this one didn’t suggest that it’s a very effective treatment for Lyme disease.

In addition, I don’t routinely recommend artemisia and black walnut long term, because they do have some potential toxicities. Short term of a few weeks to a couple of months, I think they’re okay. I see them more as additive therapy; they’re good for intestinal parasites and that sort of thing. We’ve got so many other good herbs that I think have lower toxicity that I tend to put those on the reserve list for special use, but they are very valuable herbs. It’s really great to know about them.

In summary, why are herbs so important in treating Lyme disease, not just from this study, but looking at all the information we know about herbs. This study showed that they are effective for — especially these top herbs, the cryptolepis, Japanese knotweed, cat’s claw, Chinese skullcap — they’re effective against both the motile and the cyst forms of the borrelia, especially the cryptolepis and the Japanese knotweed.

And when you look at herbs in general, they offer a wide range of coverage against many types of bacteria, viruses, protozoa, and fungi, so they’ve got a lot broader range of coverage than antibiotics. All of your herbs, now this study wasn’t specifically looking at how the herbs do affect immune system functions, but we know they do. That’s well documented.

In addition to suppressing the microbe, you’ve got that modulation or enhancement of the immune system functions, which is exactly what we want to do. And the really cool thing about herbs over antibiotics — and I think this is just a property of the phytochemistry of the plants — is the plants are using these things to take care of themselves, but they don’t disrupt normal flora. They actually help balance the microbiome of the gut and the rest of the body.

That’s a really important aspect of herbs over antibiotics that allows us to use them long term. The herbs, especially those top herbs that I mentioned, have a very low potential for toxicity. That means you can use them for a long time to keep these microbes suppressed. Work the immune system back to where it needs to be to keep things in check, so that you can actually work to get over the illness.

Yeah, it’s not a short term proposition. It took me years of taking herbs to get my life back completely, and I’ve continued taking immune-supporting herbs long term. I think it’s really, really important.

That’s about all I’ve got for you right now. Take care and be well. And don’t forget to take your herbs. 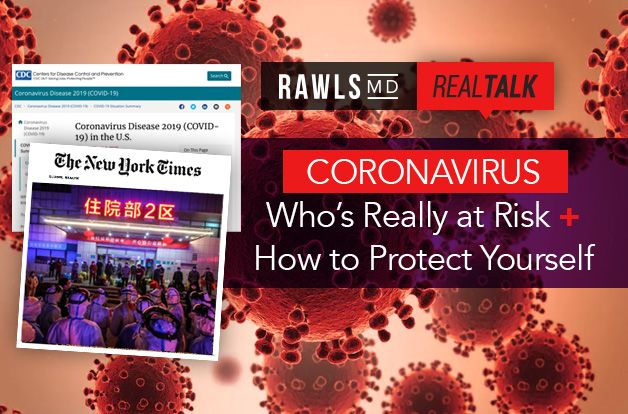 [Real Talk] Coronavirus: Who’s Really at Risk + How to Protect Yourself by Dr. Bill Rawls Posted 3/4/20 The coronavirus or COVID-19 has now gained a foothold in the United States, and misinformation about the illness is rampant. In this video, Dr.…