Real Talk: The New York Times Got It Wrong on Chronic Lyme Disease

Home/Health-Articles/Real Talk: The New York Times Got It Wrong on Chronic Lyme Disease

Real Talk: The New York Times Got It Wrong on Chronic Lyme Disease

The recent New York Times article, titled “My Son Got Lyme Disease, He’s Totally Fine,” reflects the great depth of misunderstanding of this complex illness, both by the medical community and the general public. Had I not struggled personally with chronic symptoms of Lyme disease and spent 15 years researching Lyme disease and the microbes associated with it, I might be inclined to believe everything Ms. Mandavilli wrote. But nothing about Lyme disease is as straightforward as she makes it out to be.

For starters, the writer’s statement that Lyme disease is an “easily treated infection with no long-term consequences for children, or even the vast majority of adults” is unequivocally wrong. It’s true that many acute cases, when diagnosed early and addressed with antibiotics, do resolve in otherwise healthy patients. That’s the ideal scenario, and what Akash, the child in the NYT article, was fortunate to experience. But his experience isn’t universal, because Lyme disease is a complex and variable illness.

Most people assume that Lyme disease is caused by a single microbe: Borrelia burgdorferi, discovered by Dr. Willy Burgorfer in Lyme, Connecticut in 1976. But Dr. Burgdorfer also found a second species, Rickettsia, in many of the same patients, which made him suspicious that multiple microbes were to blame for Lyme symptoms. His theory was echoed by a 2018 Finnish study, which found multiple tick-borne microbes present in patients with Lyme symptoms in both the United States and Europe.

The possibility that different Lyme disease patients could have different microbes brings the entire definition of the disease into question. Akash may have had a very different spectrum of microbes than other people with Lyme disease, and therefore a different response to therapy. It is also likely that he had a healthy immune system, an essential component for overcoming Lyme disease.

Ultimately, Akash recovered because his immune system was able to contain the microbes. So yes, the antibiotics provided benefit by reducing the concentration of microbes, which allowed his immune system to rebound, but the assumption that antibiotics always eradicate the microbes from the body has been proven false. In a 2018 study, researchers extracted live Borrelia spirochetes from the majority of 12 symptomatic patients who had not only tested positive for Lyme disease as defined by CDC criteria, they had also been treated with two to four weeks of antibiotics as per CDC guidelines.

Another case in point: A study in 2015 demonstrated that Borrelia spirochetes can persist in the body despite even six months of antibiotic therapy in patients with chronic symptoms. In my private practice, I found that it was not uncommon for people diagnosed with Lyme disease to develop chronic symptoms six months to several years after antibiotic therapy, even if the symptoms cleared initially after a sufficient course of antibiotics.

Outside of my practice, I’ve seen how chronic Lyme can upend the lives of some incredible people, adults and children alike. Like Olivia Goodreau, a young lady who contracted Lyme at age 6 and, despite antibiotic treatment, subsequently struggled both socially and academically as a result of her ongoing and debilitating physical and cognitive symptoms.

Ms. Goodreau’s story is a perfect example of why articles like Ms. Mandavilli’s are so potentially dangerous to children with chronic Lyme: They perpetuate the lack of support and understanding that can leave kids feeling isolated and scared, and prevent them from getting the care they need. (By the way, Ms. Goodreau has not only persevered, but went on to launch the LivLyme Foundation to help support other kids like her — despite continuing to experience chronic Lyme symptoms.)

So while I’m happy to hear that Akash is feeling well, someone should tell Ms. Mandavilli that her child may not be out of the woods. If her son’s immune system stays strong, he will probably be okay, but that doesn’t mean the microbes are eradicated from his system — or that they won’t make a resurgence sometime in the future. My experience with Lyme disease suggests that, despite what Ms. Mandavilli writes, they are never “long gone.”

In fact, about 10-20% of people treated for Lyme disease will go on to develop chronic symptoms, a condition called Post-Treatment Lyme Disease (PTLD), and that figure may be grossly underestimated. Even the CDC recognizes the existence of PTLD, though not its full extent, as does the New England Journal of Medicine. So while Dr. Eugene Shapiro and other infectious disease experts claim that chronic symptoms are not caused by persistent microbes, the evidence cited above strongly suggests the opposite.

Not everyone, however, gets treated with antibiotics, for a number of reasons:

This is actually a common scenario; many patients I see struggling with chronic symptoms who are diagnosed with Lyme disease don’t remember a tick bite or acute symptoms. Therefore, they weren’t diagnosed at the time of the initial infection and didn’t get antibiotics initially. Illness only occurred after a “perfect storm” of stress factors came together in their lives and disrupted their immune system functions. Likely they had been carrying Borrelia (and other coinfections) for years before developing symptoms — it was only after immune system functions became disrupted by stress that they became ill.

This group self-identifies with the label chronic Lyme disease, though the medical establishment doesn’t recognize this diagnosis — in fact, some doctors (like Dr. Shapiro) go to great lengths to discredit this diagnosis, along with the patients who are struggling with it. Because they don’t understand it and don’t have treatment to offer for it, it’s easier for them just to dismiss it.

Chronic Lyme disease, however, may represent the largest group of Lyme disease patients, but because the diagnosis is not recognized and therefore not reported by doctors, knowing the actual incidence is near impossible. The CDC recognizes a discrepancy as well, though they don’t distinguish between acute and chronic cases. They say: “Each year, more than 30,000 cases of Lyme disease are reported nationwide, while studies suggest the actual number of people diagnosed with Lyme disease is more likely about 300,000.”

There is one point on which I agree with Dr. Shapiro, though our explanations diverge: Neither post-treatment Lyme disease nor chronic Lyme disease respond well to antibiotic therapy. The reason is deeply and explicitly tied to the status of immune system functions.

The same is true in acute Lyme disease: Antibiotics can reduce the numbers of microbes associated with the initial infection, but it’s up to the immune system to finish the job. Borrelia and other tick-borne microbes, however, are very stealthy. They have the ability to infect white blood cells and get quickly dispersed to tissues throughout the body, where they infect other types of cells. If immune system functions are healthy, a stalemate can be reached, in which the microbes are not eradicated, but symptoms do not occur (subclinical infection).

Chronic symptoms occur if immune system functions become disrupted enough to allow microbes deep in tissues to flourish. Again, this can occur years after a tick bite (and it commonly does). Considering that our modern age is saturated with factors that disrupt immune system functions, it shouldn’t be surprising that chronic illnesses like Lyme disease are becoming so prevalent. Processed food, oppressive stress, environmental toxins, a sedentary lifestyle — they all contribute to chronic immune dysfunction. On top of that, the microbes also disrupt immune system functions. It becomes a vicious cycle that can lead to a lifetime of misery.

A healthful diet and lifestyle are important. Herbal therapy may also play a role: Many herbs offer antimicrobial properties that are particularly beneficial for suppressing microbes with stealthy characteristics and restoring normal immune system functions — without disrupting the balance of normal flora in the body. In my practice, I have found that patients struggling with PTLD or chronic Lyme disease respond best to a comprehensive lifestyle program that includes herbal therapy.

Considering the scope of Lyme disease and the many hundreds of thousands of people being affected, the article published in the NYT is uncaring and disruptive. It perpetuates myths and misinformation that prevent people who are suffering from getting the help they need. As both a physician and someone who has struggled with Lyme disease and still continues to experience occasional relapses, I find it disappointing to see this kind of journalism. It moves the needle backward, both for our understanding of Lyme disease and of chronic illness in general. 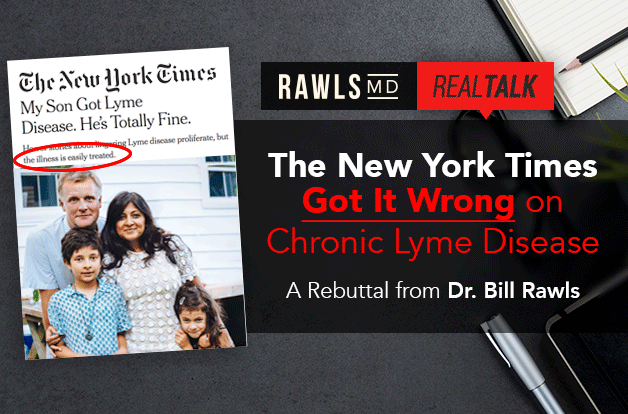 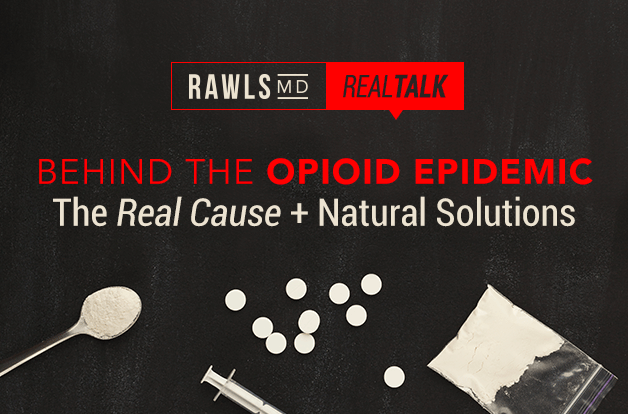 Behind the Opioid Epidemic: The Real Cause + Natural Solutions by Dr. Bill Rawls Posted 1/30/19 Using opioids to treat chronic pain doesn’t work — and it can make the pain worse. Dr. Bill Rawls explains why, plus shares safer,… 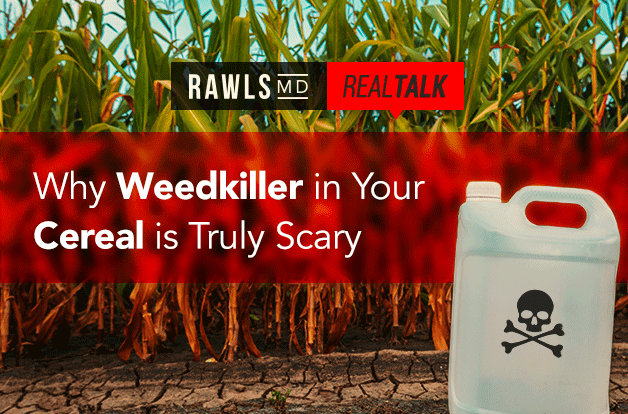