[#MeAgain] Making Up for Lost Time: How Nicole Miles Got Her Life Back After Lyme

Home/Health-Articles/[#MeAgain] Making Up for Lost Time: How Nicole Miles Got Her Life Back After Lyme

[#MeAgain] Making Up for Lost Time: How Nicole Miles Got Her Life Back After Lyme

“I think my immune system fell apart when I was having kids,” says Nicole Miles, a mother of four and reading tutor in Sandy, Utah, as she tries to pinpoint when her decades-long battle with chronic illness first began. “My oldest is 20 now, so it’s been 21 years.”

As a teenager, Nicole was hardy and active. A member of her school’s swim team, she also loved hiking and being outdoors. “I hardly ever got sick; I was a very healthy, strong person.”

“She joined the tens of thousands of chronic illness patients who are in and out of various doctors’ offices in search of answers and relief.”

When she was 21, Nicole traveled to Guatemala to serve on a church mission for 18 months. “I got bit by everything living — fleas, lice, who knows what,” she recalls. “I got Dengue fever from mosquitos, which is almost like malaria. I was really sick with that, but once I got better I kind of forgot about it.”

Nicole married her husband shortly after returning home from Guatemala. One of the things that drew her to him was their shared love of biking, hiking, and being outdoors. But those outdoor adventures came to a halt during their first year of marriage, when she was about three months pregnant with their first son.

“I became really sick with morning sickness, which surprised me because, again, I wasn’t a person who got sick,” Nicole says. “I lost 10 pounds, and I was sick throughout my pregnancy — it was really hard on my body.”

Unfortunately, giving birth didn’t offer much relief. Nicole continued to feel run down and unwell, plus she was suffering from postpartum depression, though she didn’t know it at the time (which is not uncommon for new mothers). Then, she and her husband decided to have a second child, and the cycle of sickness and postpartum depression began anew — all on top of chasing around a toddler.

Between her second and third children, Nicole realized that not only did she have postpartum depression, but she was also having thyroid issues. She was diagnosed with Hashimoto’s thyroiditis, a common cause of hypothyroidism (underactive thyroid) that seemed to help explain at least some of her symptoms of depression and chronic fatigue.

“When the results came back and she told me, ‘Yes, you have Lyme,’ I was shocked”

Treating both conditions helped Nicole regain some health, and she remembers that as a good period in her life. “Being a mother became a totally different experience, and I loved it,” she recalls. “I still wasn’t the same person, which I attributed to having children. But I look back now and think there was something more going on.”

As the years passed, Nicole continued to struggle with her health, and she joined the tens of thousands of chronic illness patients who are in and out of various doctors’ offices in search of answers and relief. By 2013, she was critically ill.

“I always felt like I had the flu,” says Nicole. “My body hurt. I went to doctor after doctor, working on my gut and thyroid, getting pills for pain and chronic headaches. I was spending thousands of dollars chasing my symptoms.”

Another year passed, and Nicole confided in a friend about what she was going through. Her friend told her, “It sounds like you have Lyme disease.” Nicole didn’t remember being bitten by a tick, but it could have happened during her trip to Guatemala, or on any one of her hiking trips. She took the idea to her regular doctor.

“He said, ‘I can’t test for that. We don’t have those tests here — there’s no Lyme in Utah,’” says Nicole. “He didn’t even ask me if I had been out of the country.” So, Nicole moved on, seeing several more experts (a nutritionist who recommended herbs for inflammation, which proved somewhat helpful; a chiropractor for her headaches and pain, with mixed results).

“I was being proactive but getting nowhere fast. I knew there was some underlying issue that wasn’t figured out,” says Nicole. “You get this hope that you’re on the right track, you find doctors that help you survive in the moment, and then you still don’t feel well and have relapses.”

“About a month in, I started feeling a difference,” says Nicole. “Then little by little, I improved more and more.”

Of course, Nicole’s illness wasn’t just impacting her — it was also stealing her quality time with her husband and children. “I didn’t have the energy to do the things that are fun, like go on hikes, or go to the pumpkin patch at Halloween,” she says. “It really affected my kids; their friends kept saying, ‘Your mom sleeps all the time.’ It was heartbreaking.”

Then, in 2015, Nicole saw a billboard on the highway that proved to be a turning point. It read, “The truth about Lyme.” “It really resonated with me, and I thought, ‘I’ve got to pursue this again,’” says Nicole. So, she found a new doctor to perform some tests, worrying all the while they wouldn’t find anything.

“When the results came back and she told me, ‘Yes, you have Lyme,’ I was shocked,” says Nicole. The doctor explained about the unreliability of testing, but that the results of her Western Blot combined with her complete blood count results as well as her medical history pointed to Lyme. She suggested Nicole begin an 18-month course of antibiotics along with probiotics to help mitigate the drug’s effect on her gut microbiome.

“I was on antibiotics for about two months, and I felt a little better, but then I started getting thrush on my tongue – it was my body telling me I couldn’t do them.” Nicole switched gears, this time searching for natural remedies and doctors who practiced alternative medicine to aid her recovery.

She found one who did ozone therapy, but it was expensive — about $6000 — and she’d already spent so much on treatments. Nicole’s husband convinced her it was worth it. “He said, ‘I just want you to get your life back!’”

They decided to take out a loan. “It was a big deal, a leap of faith that this could help us,” says Nicole. “And I have to say, I felt like ozone therapy got me on a level playing field; I felt a lot better.” Even so, when the doctor told her she could continue the ozone for as long as she liked, it didn’t feel right.

“My veins started having issues; they wouldn’t stop bleeding after the IV. My legs started to ache. I felt like the ozone was putting too much stress on my veins,” Nicole remembers. “My doctor was brushing it off, saying he had never heard of anyone having those issues. But I started reading stories online about others having it.”

She stopped the therapy, feeling discouraged. Then she went online again, looking for answers. “That’s when I came across Dr. Rawls’ book, Unlocking Lyme,” Nicole says. “I ordered it and read it in three days. I learned all about his herbal protocol. I kept saying, ‘This makes so much sense!’”

“I’m able to go on hikes or biking with my husband again, and play frisbee with my son. Dr. Rawls has given me my life back.”

Other doctors had told her to try herbs in the past, but the advice was confusing. “I didn’t know how much I should take, or whether any one herb was really helping me,” says Nicole. But Dr. Rawls’ protocol was simple and pre-formulated, and she’d heard promising things about a lot of the herbs it contained. She decided to give it a try.

“About a month in, I started feeling a difference,” says Nicole. “Then little by little, I improved more and more.” In addition to the protocol, Nicole read the educational email series that came with it. She also adopted Dr. Rawls’ gut-restoring diet, recognizing along the way that gluten was causing aches and pains in her joints. She gave them up, and added digestive enzymes to her routine, along with chlorella for detoxing.

“The diet was the hardest thing for me,” says Nicole. “Food is so emotional, and when you can’t have something you want, it adds to your stress. But you come to a point where you’re ready to sacrifice what it takes to get well.”

A little over a year after beginning the protocol, Nicole was back to feeling like herself again. “I’d say I feel 90%, I feel like it’s a miracle,” she says. “Now I’m able to go on hikes or biking with my husband again, and play frisbee with my son. Dr. Rawls has given me my life back.”

Her advice to others like her who are seeking relief from chronic Lyme? “If you want to get well, you can’t give up. Keep looking for solutions, and be patient,” says Nicole. “Herbs can help, but it’s not instantaneous – you have to keep at it and be persistent. Look for the small improvements, because that’s what keeps you going, and be kind to yourself along the way.” 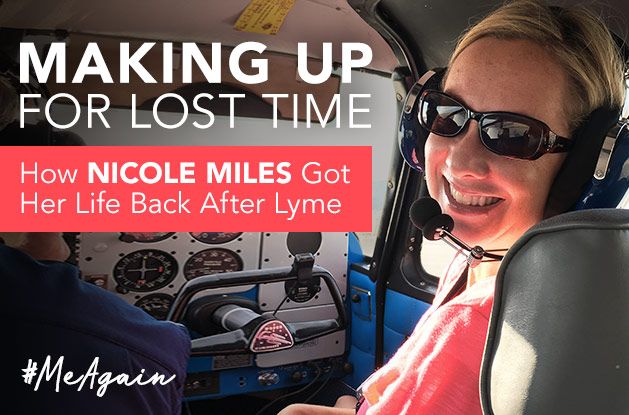 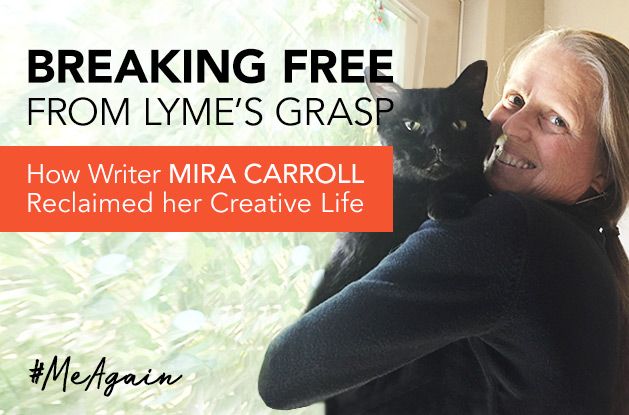 [#MeAgain] Breaking Free From Lyme’s Grasp: How Writer Mira Carroll Reclaimed her Creative Life By Mira Carroll Image Credit: Elaine Mays Posted 5/10/19 Lyme pounced when I was vulnerable, in 2011, a year when I did a little too much. My immune system surely… 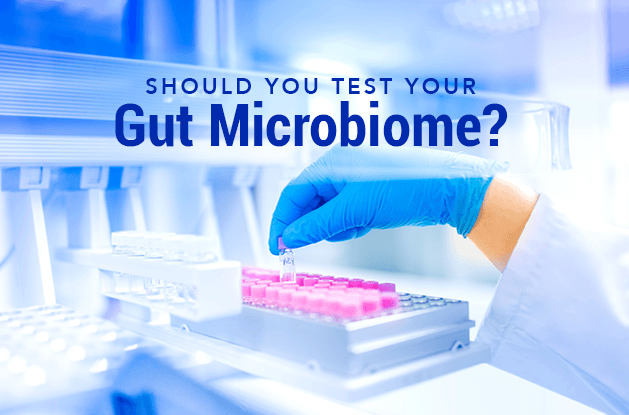 Should You Test Your Gut Microbiome? by Jill Neimark & Dr. Bill Rawls Posted 4/6/18 One of the great discoveries of modern medicine is that humans are inhabited by trillions of bacteria, viruses, parasites, and fungi.…